Best Places Scuba Diving in Indonesia – For those of you who love nature, then diving and enjoying the underwater scenery or diving is an excitement that you must try. There are so many best diving spots in Indonesia that offer a very captivating underwater beauty, and of course some of these dive sites have been recognized by the world.

So don’t be surprised if you will meet many Caucasians and foreign tourists when visiting the place. Of the many diving locations in the country that are spread from Sabang to Merauke, there are 10 of the best and most beautiful diving spots that you really deserve to try. Let’s see where are the most famous and best diving locations in Indonesia. 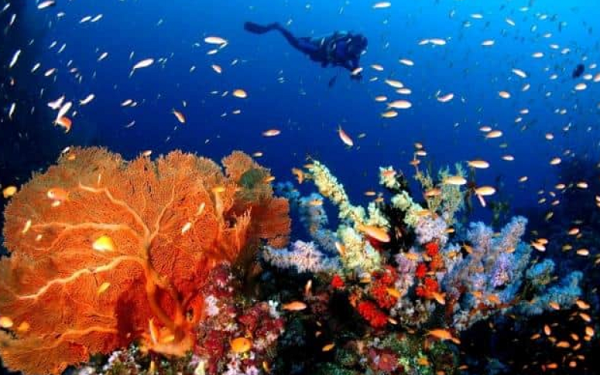 It seems you must be familiar with the word Pulau Weh, right? Pulau Weh or better known as Sabang is one of the municipalities in Aceh Province, Indonesia.

Sabang itself offers many destinations that you can enjoy, ranging from Kilometer Zero tourist attractions which became Indonesia’s first point, Mount Merapi Jaboi tours, Aneuk Laot, Priya Laot to Diving on some of the beautiful islands of Sabang.

Having a fairly strategic location, which is surrounded by the Indian Ocean and the Malacca Strait, makes Sabang the most interesting area for you to visit.

Sabang has at least 20 of the best diving areas with varying difficulty, making it suitable for beginners and experienced divers. There are Weh Island, Klah Island, Rondo Island, Seulako Island, also Rubiah Island which has a very enchanting underwater scenery with amazing marine habitats.

Make sure you provide a waterproof camera to capture exciting moments on the seabed.

If you visit the southeastern part of Indonesia, then you can find the Alor Islands which are located in the east of Nusa Tenggara. Alor has beautiful islands that reach 20 islands and straits with very charming views, guaranteed you will feel at home here.

There are about 30 diving spots such as Half Moon Bay, Baruna’s Point, Trip Top, and so on that you can try to dive.

The most interesting thing that you can enjoy while diving is playing with reef sharks, turtles, and watching the movements of other marine biota. It’s an extraordinary expectation.

Named as the heart of the world’s coral reef triangle, North Halmahera is the sea with the most beautiful coral reefs in the country. So do not be surprised if this one diving area is called the best diving spot in Indonesia which is recognized by the world.

Bordered by the Pacific Ocean, one of the cities in North Maluku Province offers a quite romantic and charming seabed.

The currents and calm waves make this sea loved by every diver wherever they are. So there is nothing wrong if you try to dive and capture the atmosphere of diving on the seabed of North Halmahera.

Even in the Indonesian capital, you can find the best diving locations with amazing views. Namely the Thousand Islands, which is located in the northern part of Jakarta, presents about 101 islands that are very beautiful and soothing to the eyes.

Spots that are quite interesting for diving are at the point of Gosong Behind the Scenes, Gosong Sepa, Melinjo, Pulau Matahari, Pulau Putri and many more.

Here you will of course be accompanied by professional diving experts, so even those of you who are beginners don’t have to worry about diving.

5. Island of the Gods, Bali Indonesia

Who doesn’t know Bali? there are even tourists who call Bali as Indonesia, of course because of the natural beauty of the captivating sea, the Island of the Gods is the most popular tourist location every year.

Bali itself has the best diving destinations in the country, starting from Nusa Penida which has many beaches for diving at Manta Point, Penida Bay, Toyapakeh, Malibu Point, Crystal Beach, and others.

Not only that, you also dive in Amed by presenting extraordinary beaches such as Amed Sea Cliffs, Lipah Bay and Gili Selang.

There is also Menjangan, the East Coast of Bali, Tulamben, to Sanur which offers the best diving experience that will never be forgotten. In addition to diving, you can also do snorkeling with friends or family who are fellow lovers of marine tourism.

Komodo Island was recognized by UNESCO as a world heritage site in 1992Apparently, this island, which is located in West Manggarai district, NTT, also has the best diving spots that you can try, there is Red Beach, Batu Tiga, to Tatawa Besar that you can use as a diving vehicle, here you can see a variety of underwater biota such as reef sharks, turtles, to barracudas

Not only that, the biodiversity and topography of the seabed at this diving location are actually able to attract visitors to linger below sea level for a long time

Raja Ampat is an archipelago consisting of approximately 610 islands that can make you chuckle. This archipelago in West Papua has the four largest islands and the most visited by foreign tourists, namely Misool Island, Salawati Island, Batanta Island, and Waigeo Island. These four islands have been named the islands that have the highest diversity of marine life.

Raja Ampat itself is one of the captivating marine parks in the country, it is even recognized by the world as the island with the most coral reefs, which accounts for about 75% of all coral reef species worldwide.

There are even many species of fish that live on the seabed of Raja Ampat with the best diving locations on Mansuar Island, Chicken Reef, Mike’s Point, Blue Magic and others.

Must Read: 5 Differences Between Freediving and Scuba Diving

Designated as a National Park on March 15, 2001, this area in Jepara Regency, Central Java has become Indonesia’s best diving area.

These four locations are very suitable for you to make the area for diving. Named a national park in 1996 by UNESCO, Wakatobi has become one of all tourists favorite seas for diving.

Located in Berau district, East Kalimantan, Derawan is a group of islands most sought after by local and international tourists. The beauty of the seabed offered by derawan is able to seize the attention of many foreign travelers to visit and dive in the derawan sea.

Well, after reading information about the 10 best diving spots in Indonesia that are recognized by the world, it definitely makes you want to fly there and dive right away. It is necessary to remember, keep safety first and obey the rules given by your diving expert.